SkillGaming War: what is it, how to win? 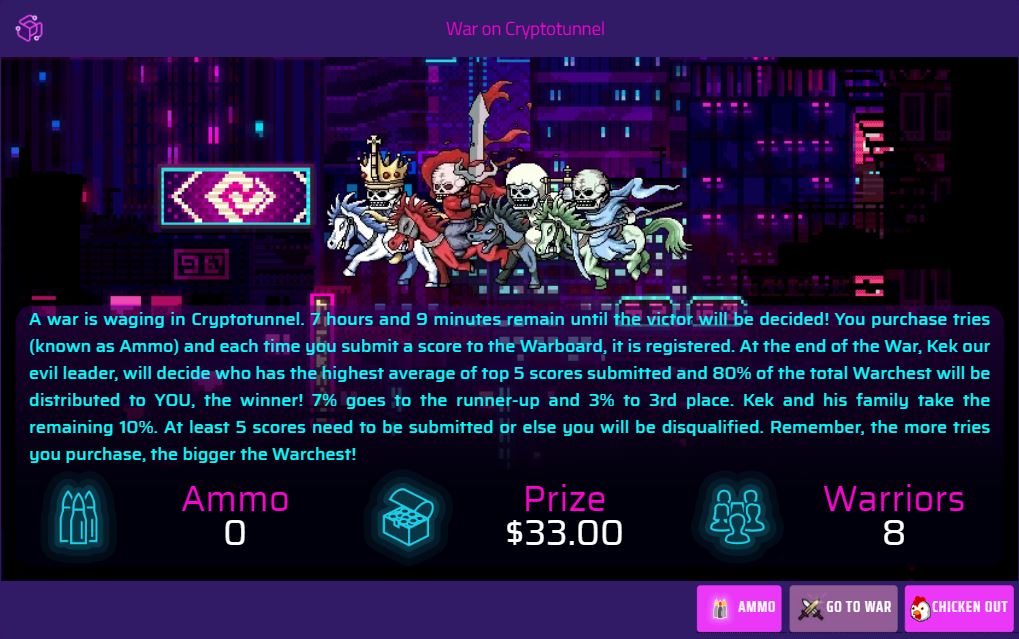 SkillGaming War is the latest SkillGaming skills gaming mode that allow gamers to earn money. How does it work, what should you know before becoming a warrior, what are the prizes? Today we delve into SkillGaming war mode, that allows you to fight cohorts of gamers at once, defeat them and run away with the warchest! You don’t have a SkillGaming account yet? Click here to register for free.

A SkillGaming War is, put simply, a leaderboard on any given game. It comes on top of 1P and 2P modes (read our SkillGaming review to learn more). In order to participate in a war, gamers must buy ammos (or tries). It costs $1 for 10 ammos. Players war score is the average of his/her 5 best scores. You can buy as many ammos as you wish until the end of the war (24 hours).

How a war starts? How to do?

Anybody can start a war (unless a war was already initiated on the game you want to play). You even get 10 free ammos for bravely starting hostilities. Why? Because there is a caveat, as explained below. To start a war, simply click on a game, then click on WAR. Click on AMMO , then CONFIRM PURCHASE to start the war. If it has already started, use the same process to join it.

The money wagered by warriors feeds the warchest. It’s split among the 3 best players this way:

The remaining 10% is collected as a war fee by the platform.

Here are a few things that you will learn after participating in a few wars. It’s probably better to know those things up front, so keep reading.

Starting a SkillGaming War: great for the bonus, but be careful about late joiners

Please note that after starting a war, you will have to wait for another warrior to join before you can start to play. It means that you have to be careful, specifically with the less popular games. If nobody joins immediately, you might be short of time to do your own attempts. It means that you have to make sure you will be able to open SkillGaming shortly before the war ends and react in case a gamer joined the challenge at the last minute.

This can happen fortuitously, but mostly it would be because some opportunistic gamer will seize the opportunity to grab your dollar without risk. It’s definitely a skills based betting mistake to be avoided.Yes, that’s not a lot of money, but you could spend it in another war and multiply your chances of earning money while playing games.

Bidding war: when gamers with deep pockets become too big to fail

A bidding war can only happen on games that end up quickly, like Cryptoblast 3, Cop Buster, etc. Indeed it would be too time consuming on games that can last 5-10 min, or more. But with those quick ending games it happens, and you have to be prepared to that. What is a bidding war? It’s a war in which a gamer, or several gamers, keep bidding massively to make sure they win the first prize.

After having committed a certain amount, a gamer who started a bidding war gets even more incentivized to bid more since he now has so much to lose. Imagine a 100 dollar war chest, while you have fed 50% of the pot or more… You’d better make sure that you win that thing! If you are not ready to commit more than a few dollars, you might want to avoid those games as you will have no chance to win. Of course those TBTF gamers (Pizzacat, Tolak von Chicklau, to name 2… Hi!) must also have skills to win, it’s not all about the money (although that’s debatable when it comes to von Chicklau). But in such instance you would need both to succeed (and also nerves of steel, because a bidding war is quite stressful).

Don’t forget to open your SkillGaming account if not done yet!